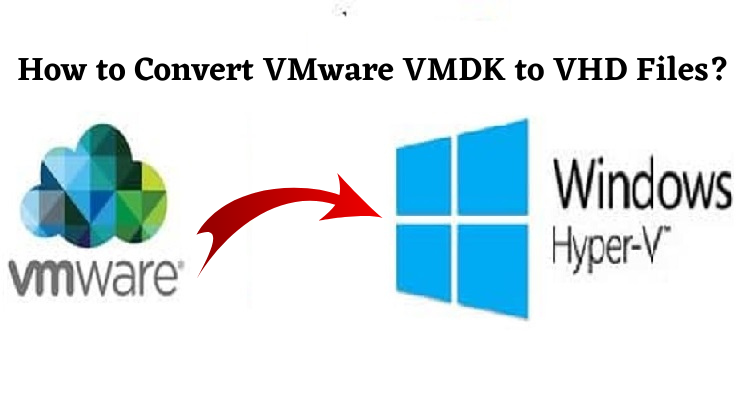 Virtualization is one the best solution for companies all over the globe as it permits businesses to expand the utilization of their hardware. The marketplace is loaded with a huge variety but VMware and Microsoft Hyper-V are high in demand.

Both of them serves the purpose well. They both have a different set of features and specifications.  VMware stores virtual disks in VMDK file while Microsoft Hyper-V saves VHD format. Many stances create a need to convert VMDK into  VHD file.

VMDK: VMDK is abbreviated for Virtual Machine Disk. It is created by VMware machines. This virtual machine can copy the computer system and offers all the features of a physical computer. You can store the whole data of a hard drive in a.vmdk file. It can also be used as a regular hard drive or backup device for significant information. You can store up to 2TB of data in a VMDK file. On the contrary, VMware vSphere can store up to 62 GB of data. It is important to know that several VMware products use VMDK file format and some of them are as follows:

Even some third-party tools also use the same format.

VHD: VHD is shortened for Virtual Hard Disk and released by Connectix for virtualization. However, in 2003, Microsoft acquired it and in the year 2005, VHD format was provided to the third parties under Microsoft Open Specification Promise. A VHD can work as a traditional physical disk for installing Operating System, create files/folders, launch applications, etc. In addition to this, the VHD file is flexible and easily managed, and controlled by a virtualization manager.

Reasons for Converting VMDK to VHD

People are more comfortable using Windows Server. Now, Microsoft Hyper-V has an in-built feature with Windows Server, for which you don’t need to pay any extra charges like VMware machine.

Ways to Convert VMDK to VHD

This is a standalone application widely used by IT professionals or solution providers who wanted to upgrade themselves from Virtual Machine Disks to Microsoft’s Hyper-V hosts and Azure. For converting physical machines and disks to Hyper-V hosts, you can use this solution.

It is supportive of Windows PowerShell that supports automated conversions and combines with data center automation workflows. Being the latest edition of Virtual Machine Converter which comprises of online conversion of physical machines to virtual hard disks.

Before installing the tool, ensure that your system meets the given below requirements:

Check the working of the machine:

You can convert healthy as well as normal VMDK files to VHD, but if the VMDK files are damaged, then conversion is not possible. There are some free of cost solutions for repairing damaged VMDK files but there is no guarantee of successful results from them.

Wrap Up: Convert VMDK to VHD becomes a need after files get damaged or when you are move from VM Ware to Hyper-V. However, if VMDK files are corrupted, the conversion is not easy.