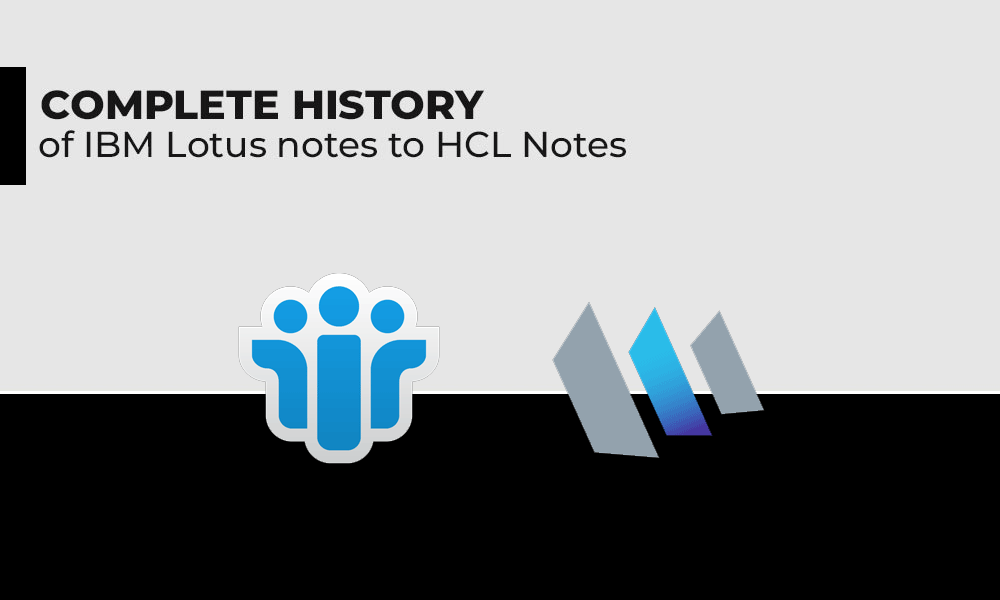 Summary: Through this post, we will tell you about IBM Lotus Notes and its journey. We will discuss all versions of IBM Notes from its release around 30 years ago till now.

The development of Lotus Notes was encourage by PLATO Notes which was create in 1973 at the University of Illinois.

In year 1984, Ray Ozzie who worked with PLATO, fix a deal with Mitch Kapor, the founder of Lotus Development Corporation. As a result, in 1984, Iris Associates was formed to develop products that can merge the potential of PCs with collaboration tools introduced in PLATO.

This is how the Lotus Notes development began.

This was a major release which has focused on scalability. After its success in the initial stages, Iris wished to scale Lotus Notes to support 10,000 users & target big organizations as their initial target was small & medium organizations.

In 1990s, the result of this release is large organizations start buying Lotus Notes.

In May 1992, Lotus Notes came with 3.0 version comes with features like full-text search, hierarchical names, forms, views and filters.

By this time, more than 50,000 users & 2000 companies used Lotus Notes. However, the aim behind releasing this version is cross-platform compatibility. It aimed at the larger market with less price tag. It was suitable to 200 users simultaneously.

This v4.0 was released in the year 1996 with a new look & redesigned user interface as per user’s feedback. In this version, it comes with a simplified interface which made it easier to handle by all users. This year, Lotus Notes released an HTTP server add-on called Domino. This allows Notes documents to render as web pages.

Later on in December 1996, Domino web server release 4.5 version of core Notes Server and the whole server program was re-brand.

In year 1999, Lotus Notes & Domino Server 5.0 were released. It has parts of architecture like in v1.0 and compatible clients released for v1.0.

With this version 6.0, it improved the UI and scalability of the Notes and Notes client. At this time, the world was dominate of instant deployments, low ownership costs, and increased productivity.

In this version, calendaring & other functionalities were improved.

In August 2005, Lotus Notes and Domino 7.0 were release to make them easy to handle and work with minimum resources. This version made it available for Windows, Mac & Linux/x86.

In June 2005, version 8.0 of Lotus Notes & Domino was introduced. In August 2007, some changes were create to earlier versions. Now, you can use Lotus Notes as open source & on a java-based platform.

A major release in October 2018 with 10. The version was there having various feature improvements, including Domino Query Language, performance monitoring interface, extensions for database, etc. This version also supported CentOS.

Version 10.0.1 was release in May 2019 with the option to configure CORS (Cross-Origin Resource Sharing). Which permitted web applications from another origination to approach to assets on any Domino Web Server.

In December 2019 with the release of the 11.0 version, IBM Notes rebranded it as HCL Notes. To encrypt the local database, it came with a 128-bit AES option.

This is all about the history of IBM and HCL Notes. In case your organization is working with Lotus Notes & HCL Domino for emailing, calendaring & collaboration but wants to move to MS Exchange or MS Outlook, we recommend using NSF to PST Converter by Softaken. This application will help you to convert NSF files to Outlook-compatible PST file format. This software will also offer you various export options & a demo version for complete features evaluation.